The Motorola Cliq 2 is also called MB611, it is a new smartphone announced in CES 2011.

The Motorola Cliq 2 use a rechargeable li-ion battery, the battery code is BP6X. According to our review you're going to have to supervise closely on the Motorola Cliq 2. Motorola promises 8 hours of talk time, but we found that number to be a bit farfetched, especially with the multitude of applications being run at once. We really had to dive into the Task Manager and going on a killing spree in order to conserve battery life. Even Android Market applications like Mobile Andrio put a strain on the battery. When we disabled Wi-Fi and kept the gaming to a minumum, the Motorola Cliq 2 exhibited a mediocre battery performance. A lot of it was standby time as well, so you'll just have to invest in a few extra chargers in order to keep this thing juiced throughout the day. 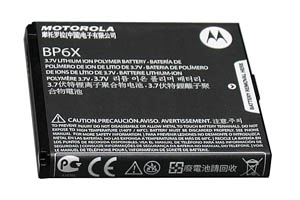