Panasonic, which already manufacturers batteries for gasoline-electric hybrid vehicles, joins Toyota Motor Corp. and Daimler AG in taking a stake in the automotive start up headed by Elon Musk. It also underscores increasing confidence in Tesla's technology and ambitions.

Panasonic said its investment came through the purchase of common stock in Tesla. Japanese media reports said the purchase gives Panasonic a 2 percent stake in Tesla.

Tesla currently uses Panasonic battery cells, and cells from other manufacturers, in its battery modules and has collaborated with the Japanese company in developing next generation power packs. The partners intend to explore the joint marketing and sales of battery packs.

Toyota invested $50 million in Tesla in May and has since said it will pay another $60 million to team with Tesla in developing an all-electric version of its RAV4 small SUV.

Panasonic is trying to position itself as a top supplier of batteries for next-generation vehicles that run on all-electric or hybrid powertrains. It has a joint venture with Toyota, called Primearth EV Energy Co., to make nickel-metal hydride and lithium ion batteries.

And it is also merging with rival Japanese electronics maker Sanyo Electric Co., another major manufacturer of nickel-metal hydride and lithium ion batteries.

Tesla is best known for its $109,000 battery-powered Roadster. But the company aims to begin making $54,700 electric Model S sedans in 2012 at a California factory formerly operated through a joint venture between General Motors and Toyota. 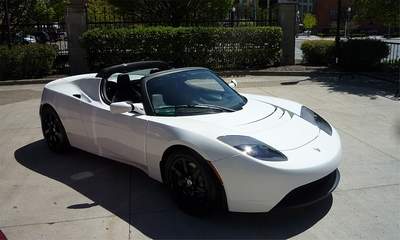