If you’re a writer, student, or blogger, the new MacBook Air might be your portable dream machine. For low CPU intensive tasks, the lightweight notebook boasts a battery life that is significantly better than the advertised time of 5 to 7 hours. AnandTech did some extensive reviews of the new MacBook Air and found the battery to last a staggering 7 to 11.2 hours for the 11″ MacBook Air and 13″ 2010 models respectively:

As glorified typewriters, you can’t beat the battery life offered by the MacBook Air. Light web browsing, document creation and music playback have minimal impact on the Air’s battery life. In fact, we actually beat Apple’s battery life claims in our light tests. The 11-inch Air delivers nearly 7 hours on a single charge and the 13-inch managed 11.2 hours. For a writer, you can’t do better than this.

The results were found with screen brightness at 50%, connected to WiFi, playing an MP3 in iTunes, and with no Flash player loaded while browsing the web. Here’s the chart of the new Air against other MacBook and MacBook Pro models: 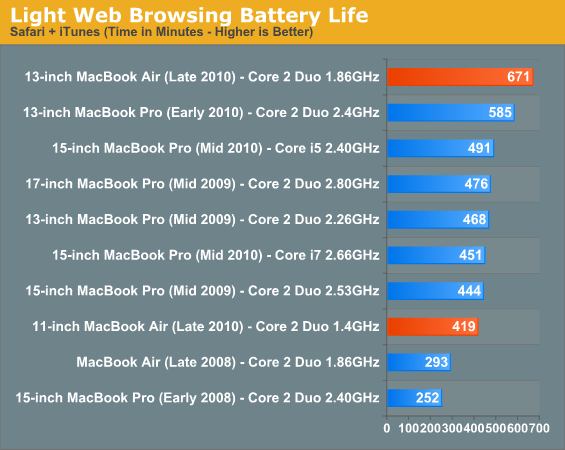 Apparently the addition of the Flash plugin is what really makes a difference. AnandTech then reviewed the new MacBook Air with Safari browsing around with Flash player enabled and running on a web page, and found battery life is reduced to 4 to 5 hours for the 11″ and 13″ models. No wonder Apple stopped shipping Flash with new Macs.

Based on the above findings, here’s my suggestion: If you’re going to get a new 2010 MacBook Air 11″ or 13″ model, I would strongly recommend installing the latest version of Flash but then using something like ClickToFlash to prevent Flash from automatically loading, this should provide a generous boost in battery life since it lets you choose when Flash loads on a webpage.

Here’s the AnandTech chart of ‘worst case scenario’ battery life for the new Air. This includes browsing the web with multiple Safari windows open all with Flash running, plus playing an XviD movie, and while downloading multiple files. In this test the new MacBook Air performed at a rather average level: 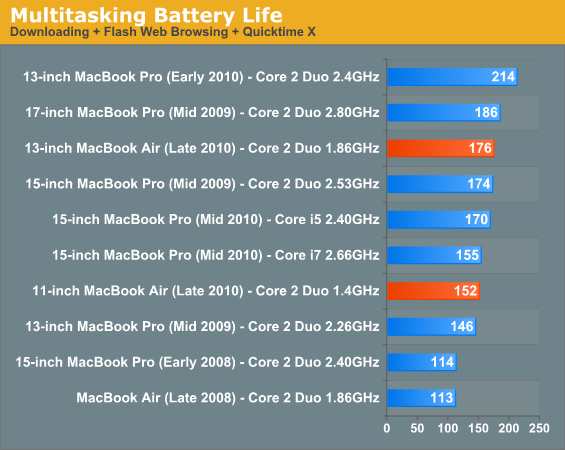 From reading various reviews and reports on battery life, it looks like Apple averages usage situations to arrive at the 5-7 hour measurement. The good news is that it’s a pretty accurate claim for the average user. The better news is that if you’re light with your battery and CPU usage, you can squeeze out much longer battery life.

I like real-world battery tests and I think AnandTech does a pretty good job of capturing what you would expect in real world usage. You can read the full AnandTech review here.

If you’re in the market, you can grab the new MacBook Air 11.6″ and MacBook Air 13″ from Amazon or the Apple Store.